First game of their lives

I was up at 6.30am last Saturday for one of the year’s big sporting events. My two grandchildren were having their debut games for the Naenae soccer club in the under-6s and under-7s.

My daughter teased me that I was more excited than her kids. Well, I did buy their new red and lime green soccer boots. And I’ve been searching the web for how to teach kids soccer because although I coached rugby for 10 years, I don’t know much about the technicalities of the round-ball game. 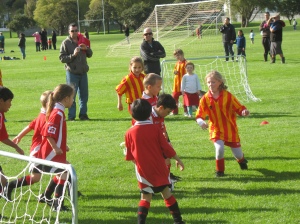 I was at Naenae Park by 8.45am with three grandchildren, my daughter and her partner. The two debutantes looked smart in their black, red and white uniforms, like mini-Manchester United players. Grandchild number three, who is two, loved being part of the action so long as he had a ball too.

It was a scene being repeated all over New Zealand in soccer, rugby, league, hockey, netball and other codes: sun shining, kids everywhere, friendly and sociable parents on the sideline who become anxious, amused or proud as the game starts and their offspring tear about the field. END_OF_DOCUMENT_TOKEN_TO_BE_REPLACED